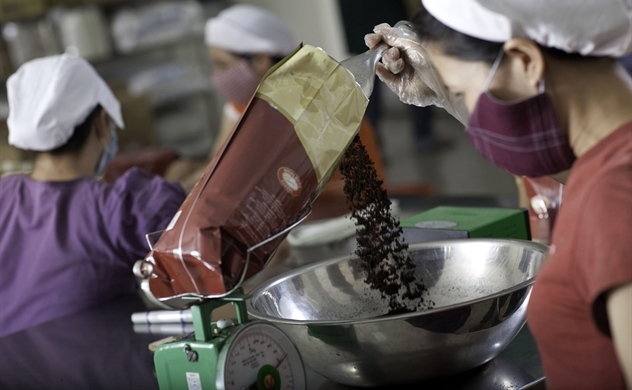 Bean availability in Vietnam has fallen as shipments rose 17% to 1.13 million tons in January-July from a year earlier, according to customs data. Photographer: Jeff Holt/Bloomberg

Stockpiles will halve by the end of September from a year earlier, according to the median estimate in a Bloomberg survey of traders. Output from Vietnam, the world’s largest robusta supplier and second-largest coffee producer is also expected to drop in 2022-23.

The dwindling reserves and poor harvest outlook come at a time when global coffee consumption is recovering from a virus-induced slump. Benchmark robusta prices have surged 17% from a 10-month low in the middle of July on supply worries from Brazil to Africa.

Robusta, used by instant coffee makers including Nestle SA or as a blend in espressos, has been making a comeback. The variety, normally cheaper than arabica, is in strong demand as people look for alternatives to mitigate the impact of rising inflation.

Bean availability in Vietnam has fallen as shipments rose 17% to 1.13 million tons in January-July from a year earlier, according to customs data. The increase in exports has been aided by an improving supply of containers and ships, but may be difficult to sustain given the shrinking stockpiles.

“We are worried” about a shortage through early November, said Phan Hung Anh, chief executive of Quang Minh Coffee Trading JSC in the southern province of Binh Duong. Local growers are probably holding only around 2% of their annual output, compared with about 13% a year earlier, he said.

The global coffee market is facing one of the biggest deficits in recent memory after drought and frost slashed Brazilian output. Colombia is struggling to recover from crop-damaging rains, while Honduras, Guatemala, and Nicaragua are running out of supplies from the 2021-22 harvest. Costa Rica’s next-season crop is showing signs of stress, and drought has cut robusta yields in Uganda.

The slump in Vietnamese inventories pushed domestic robusta prices in Dak Lak province, which accounts for about one-third of the country’s harvest, to a record high of 49,100 dong ($2.10) a kilogram last week.

Carryover stockpiles are seen at 200,000 tons at the start of the new season on Oct. 1, compared with an estimated 400,000 tons a year earlier, according to the survey. Output may fall 6% to 1.72 million tons in 2022-23, the survey showed. The robusta variety accounts for about 90% of Vietnam’s coffee output.

A drop in the planting area for “profitable” fruit trees and a rise in fertilizer prices will probably affect production in 2022-23, said Do Ha Nam, Intimex Group’s chairman, and the Vietnam Coffee and Cocoa Association’s deputy head.

Citigroup Inc. has trimmed its projection for coffee production in Vietnam this year and the next as local crop surveys indicated cherry development had suffered from the lack of fertilizer usage this year. “This poses a substantial risk to the prospect for the upcoming planting season,” it said in a report earlier this month.