TikTok award for Vietnamese cowherd who counts his blessings in English 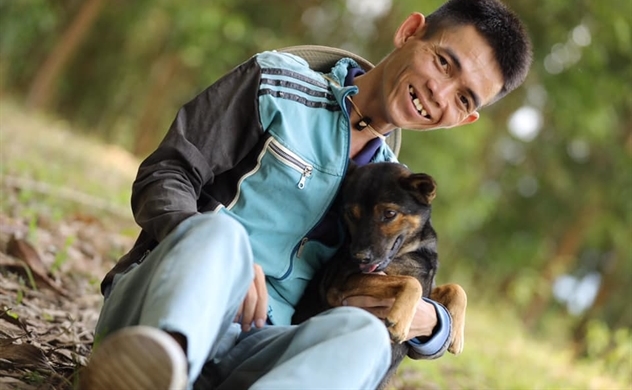 Tiet became an Internet phenomenon after several international stars commented on his "numbers song." Photo courtesy of So Y Tiet.

So Y Tiet, a Vietnamese cowherd who became an international sensation after tunefully counting numbers in English is Tiktok’s Inspiring Creator of the Year.

"One day, after I took my cows to graze in the morning and visited a neighbor in the afternoon, I was very bored and decided to make videos of myself herding cows," Tiet said on receiving his prize at the TikTok Awards Vietnam 2020 on December 27 in Ho Chi Minh City.

The 32-year-old native of the central province of Binh Dinh said he wanted to show people that happiness comes from the inside.

He also won applause from the audience as he showed off his dancing skills.Tiet has become an Internet phenomenon after several international stars commented and worked on his numbers song, in which he puts numbers in English, alphabets, and days in a week to an impromptu tune.

Among those who shared and commented on his video were American rapper Rapper Carbi B and singer Rihanna who said, tongue-in-cheek, that he was the only one she would trust to count the vote in the U.S. Presidential elections.

Tiet's initial video has raked in over two million views on YouTube while the Number Song (From 41 to 49) video has 1.8 million. He has 1.4 million subscribers on TikTok and more than 600,000 on Instagram.

The humble cowherd said that while he has not earned money from his social media videos, their popularity and exposure has earned him a few invitations to sing at local functions.

TikTok also gave out 10 other awards including Creator Of The Year, Hashtag Campaign Of The Year and Most Contributed Streamer to content creators who have spread positivity on the short videos stream platform.

TikTok has soared in popularity in Vietnam, where it had 10 million users as of August.