This Hanoi Hotel Is Coated in 24-karat Gold — Yes, Even the Toilets 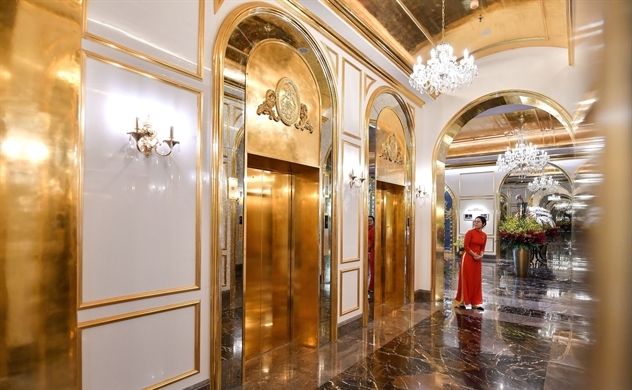 The gold standard on hotels has been raised at this Wyndham property, compete with a 24-karat gold rooftop infinity pool.

When Bruno Mars sang “24K Magic,” he must have been dreaming about this Vietnamese hotel. Billed as the world’s first gold-plated hotel, the Dolce by Wyndham Hanoi Golden Lake opened its luxurious doors in Vietnam’s capital city on July 2.

The five-star hotel is filled with golden touches, including gold-plated tubs, sinks, and yes, even toilets, according to Reuters. Plus, there’s a 24-karat gold tiled infinity pool on the rooftop. Bathrooms are decked out with yellow metal.

Located near Giang Vo Lake, the 441-room hotel is 10 minutes away from Hanoi’s city center and quite a juxtaposition compared to the other buildings in the area, which are mostly stark Soviet-era structures. “At the moment, there is no other hotel like this in the world,” Nguyen Huu Duong, chairman of Hoa Binh Group, which owns the property, told Reuters in July.

Duong also said that about a ton (or 2,000 pounds) of gold was used to decorate the hotel.

Rooms start at about $250 a night, relatively similar to the area’s other luxury hotels without any gold adornments.

The hotel even serves dishes topped with edible gold flakes, and rooms have golden cups next to the coffee maker with gold-colored details. For an event at the hotel, models were even painted in gold.

Duong, a Vietnam War veteran who once was a cycling taxi driver and made his fortune in construction and property investments, also told the news outlet that he’s planning two more gold-themed properties in the country: one in Ho Chi Minh City and another in central Vietnam.