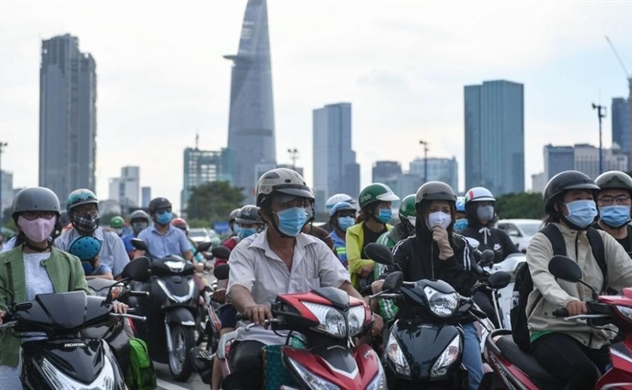 Vietnam’s growth rate targets of 6.3 per cent in 2022 and 6.8 per cent in 2023 are feasible, but greatly rely on how the pandemic develops over the next two years.

Regarding economic prospects for Vietnam in 2022, Pincus highlighted that the International Monetary Fund (IMF) forecast growth in trade volume at 11 per cent for the year.

“That looks too optimistic now. But even half of that level would provide a boost to Vietnamese exports,” he said.

The UNDP expert spoke highly of the Government’s vaccination programme, with around 90 per cent of adult population fully vaccinated at present.

“On Sept 23, in an important move, the Vietnamese Government noted that appropriate measures and steps are needed to ‘adapt safely and flexibly’ or ‘live together’ with the pandemic,” said Pincus.

In 2020, Vietnam’s growth was nearly 3 per cent, which was among the highest in the world during the first year of the pandemic.

Both the Central Institute for Economic Management (CIEM), under the Ministry of Planning and Investment, and the World Bank were optimistic about Vietnam’s economy in 2021, predicting growth of 6 per cent and 6.8 per cent, respectively.

“But at the end of April when the fourth wave of the outbreak began, the third quarter was very difficult, with lockdowns and social distancing causing exporters to temporarily shut down. GDP in the third quarter was estimated to decrease by 6.2 per cent compared to the same period last year, the deepest decrease since Vietnam calculated and announced quarterly GDP up to now,” he said.

Vietnam's GDP growth is estimated at 2.5 per cent in 2021, according to the statistics authority.

UNDP's recommendation since August has been for Vietnam to pursue a more active fiscal policy to support domestic consumption.

“There is nothing wrong with running a public sector budget deficit when economic growth is slow. The Government, because it is able to borrow cheaply and does not have to turn a profit, is really the only sector that can stimulate demand during a recession,” he said.

“We recommend a universal cash assistance programme of 1.25 per cent of GDP (5 per cent of quarterly GDP) to support domestic consumption. This would help families that are struggling to make ends meet because they have lost jobs or household businesses cannot earn money,” said Pincus.

It would also help domestic businesses, which are losing money because they do not have enough customers. This is particularly important in the run up to the Lunar New Year Festival (or Tết holidays). Many small businesses rely on sales during this period, and if they underperform it could mean that some businesses cannot survive.

These cash transfers could be carried out easily based on existing identification cards or birth certificates without need for a lot of extra administration. It would be important that the demand injection is carried out quickly and equitably.

Families with small children and older people are most vulnerable to transient poverty. In a survey carried out by UNDP and the Centre for Analysis and Forecasting, it shows that transient poverty in September was up over thirty per cent compared to last year, and that many families were struggling to buy food and pay rent.

It is important to remember that cash payments partly pay for themselves because of the multiplier effect. So, if families with older people or small children spend 70 per cent of their income on domestically produced goods and services, the effect of successive rounds of spending is 3.3. In other words, every VNĐ1 spent generates another VNĐ3.3 in demand.

So, the taxes that the Government receives increase as total domestic demand grows.

Another recommendation from the UNDP is that the Government should support export industries by organising safe travel for workers from their home provinces to industrial estates as well as safe accommodation for workers when they get there.

Referring to recommendations for Vietnam to soon resume tourism in a safe and effective manner, Pincus said that Vietnam had been careful about restarting tourism.

Vietnam could learn from other countries by allowing travel under carefully controlled conditions, he recommended.

Scheduled airlines should be allowed to restart while all visitors must have proof of complete vaccination – now that would probably mean three jabs plus, and a negative PCR test at most two days before travel.

People who work in the tourism industry would need complete vaccinations and routine tests, which should be paid for by their employers.