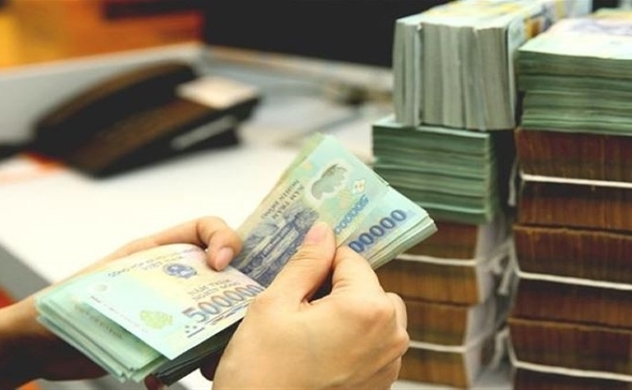 A bank teller counts cash at an office in Hanoi. Total assets of many small banks by the end of the first quarter of this year decreased against last year. Photo tinnhanhchungkhoan.vn

Despite gaining positive profits, total assets of many small banks by the end of the first quarter of this year decreased compared to last year due to a drop in deposits.

According to Petrolimex Group Commercial Joint Stock Bank (PGBank)’s Q1 financial statement, its total assets by the end of March 2022 fell by 7 per cent compared to the end of 2021 to only VNĐ37.79 trillion.

A positive point at PGBank in Q1 2022 was its bad debts, which decreased by 8 per cent to VNĐ635 billion.

Similarly, the total assets of Saigon Commercial Joint Stock Bank for Industry and Trade (Saigonbank) by the end of March 2022 were VNĐ23.43 trillion, down 4.8 per cent over the beginning of the year. Specifically, cash was slightly up by 2.9 per cent to VNĐ211 billion and lending to customers increased by 0.9 per cent. Meanwhile, the bank’s deposits at the SBV declined by more than 11 per cent and deposits at other credit institutions also sharply fell by more than 21 per cent to only VNĐ4.42 trillion. Deposits of corporate and individual customers at the bank also inched down by 0.5 per cent.

The same trend was also seen at Việt Á Commercial Joint Stock Bank (VietABank), whose total assets as of March 31, 2022 decreased by VNĐ10.03 trillion to VNĐ91 trillion compared to the end of 2021. The cause of this decrease mainly came from the reduction of deposits at the SBV (down by about VNĐ1.08 trillion); and of gold and cash deposited at other credit institutions and loans to other credit institutions (down by about VNĐ7.98 trillion).

The total assets of Bắc Á Commercial Joint Stock Bank (BacABank) as of late Q1 2022 also fell slightly by 2 per cent compared to the beginning of the year, reaching VNĐ117.07 trillion, with its deposits at the SBV and other credit institutions declining significantly by 41 and 32 per cent to VNĐ600 billion and VNĐ5.92 trillion, respectively.

Meanwhile, BacABank’s lending to other credit institutions, and corporate and individual customers grew by 36 and 3 per cent to VNĐ2.59 trillion and VNĐ86.98 trillion, respectively. The bank’s customer deposits also slightly increased by 2 per cent to VNĐ95.03 trillion.