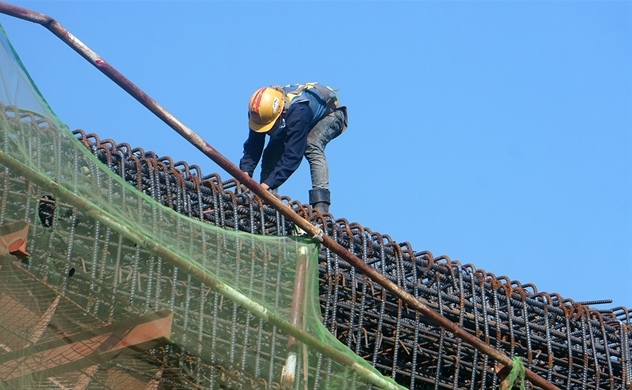 A man works in a construction site in Ho Chi Minh City. Photo by Shutterstock/xuanhuongho.

The rising costs of imported raw materials are pushing up prices and threatening to cause inflation amid the ongoing economic recovery.

Corn and soy prices have risen by 50-60 percent since the beginning of this year, pushing up animal feed prices.

The prices of industrial materials like steel and concrete have shot up by 50 percent this year, and many contractors face difficulties since they cannot ask developers to pay more than the contracted amounts.

"The rise in prices of raw materials is inevitable as Vietnam and other economies aim for a quick recovery from last year’s Covid-19 impacts," economist Le Dang Doanh told VnExpress International. "Inflation is a price we must pay for a rebound."

Vietnam’s high degree of openness means it is more susceptible to global price changes, he pointed out.

Truong Thi Chi Binh, deputy chairwoman of the Vietnam Association for Supporting Industries, said many suppliers of motorbike parts for instance have been absorbing the high costs since their buyers would not pay more.

Nghiem Xuan Da, chairman of the Vietnam Steel Association, said: "The surging prices of steel globally cannot be stopped even though the Vietnamese government has made efforts to control them."

Experts said the government’s target of keeping inflation under 4 percent this year would be difficult to achieve.

Thoi Bao Tai Chinh Viet Nam quoted economist Chu Thanh Tuan as saying inflation is set to rise even further in the second half of the year as there have been forecasts of surging global oil prices.

But this would be part of the government’s strategy to ensure economic recovery as other economies like the U.S, the U.K. and Europe are also allowing inflation to rise in the short term, he said.

The local sourcing of inputs for animal feed has been talked about for years but not implemented since farmers have abandoned low-priced produce like corn, wheat and soy for fruits.

Nguyen Tri Cong, chairman of the Dong Nai Province Husbandry Association, said limited land availability in a country with a large population prevents the expansion of farming for animal-feed inputs.

Binh said that in the long term the government has to promote the domestic production of feedstock for steel.

But the Ministry of Finance dismissed all these fears and said it has anticipated the rising prices of raw materials and feedstock since last year, and unless there are unexpected factors inflation would be kept under 4 percent this year.