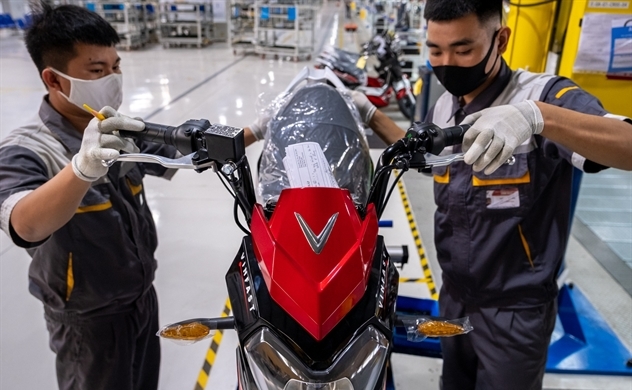 Workers labor on a VinFast Impes electric scooter on the assembly line of the automaker's factory in Haiphong, Vietnam. Photographer: Linh Pham/Bloomberg

Vingroup JSC is considering a U.S. initial public offering of its car unit VinFast that could raise about $2 billion, according to people familiar with the matter.

The biggest carmaker in Vietnam is working with advisers on the potential offering that could take place as soon as this quarter, the people said.

An offering could raise as much as $3 billion, said the people, who asked not to be identified as the information is private. The company is seeking a valuation of at least $50 billion after a listing, one of the people said.

At $2 billion, VinFast’s IPO would be the biggest ever by a Vietnamese company after Vinhomes JSC’s $1.4 billion first-time share sale in 2018, according to data compiled by Bloomberg. The carmaker could also become the first Vietnamese company to list in the U.S. if successful.

Details of VinFast’s IPO including size and timeline could change as deliberations are ongoing, the people said. A representative for Vingroup declined to comment.

The carmaker plans a Vietnam roll-out of electric cars later this year and said last month it has received 3,692 local orders. The startup aims to deliver its first electric vehicles to the U.S., Canada and Europe next year and is looking to open a factory in the U.S.

Shares in Vingroup have risen 22% this year, giving the company a market value of about $19 billion.