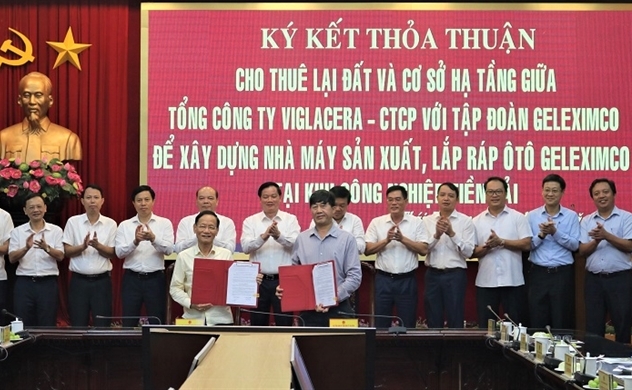 Vietnam’s Geleximco Group is planning to build an $800 million automobile manufacturing and assembling factory in northern Thai Binh Province, whose first phase is expected to be put into operation in 2024.

Geleximco recently signed an agreement to lease a 50-hectare land plot at Tien Hai Industrial Park in Thai Binh Province to prepare for the construction of the automobile manufacturing and assembling plant.

The factory is expected to cost about $800 million, and its construction and operation will be divided into two stages.

During the first phase, the construction will cost approximately $300 million and start in the first quarter of 2023.

The factory is expected to be put into operation in the third quarter of 2024 with an assembly output of about 50,000 cars per year.

About 1,200 workers will be recruited.

In the second phase, Geleximco will splash out another $500 million to expand the scale of the plant.

According to Geleximco’s plan, the factory uses advanced European technology to ensure the creation of high-quality and eco-friendly products.

The facility will aim to produce fuel-friendly automobiles such as electric cars and fuel cell vehicles as well as auto parts and accessories to supply to automobile manufacturers and assemblers.

If approved, the project will be the largest investment in Thai Binh Province so far, said Nguyen Khac Than, chairman of the provincial People’s Committee.

Chairman Than suggested that Geleximco finish its proposal in an expeditious manner and submit it to the provincial administration for approval.

The group should select competent partners to implement the project and make sure that the operation of the factory is safe and environmentally friendly, the official added.

Geleximco is a leading private economic group in Vietnam, focusing on four main fields including industrial production, finance and banking, real estate, and trade and services, according to its website.