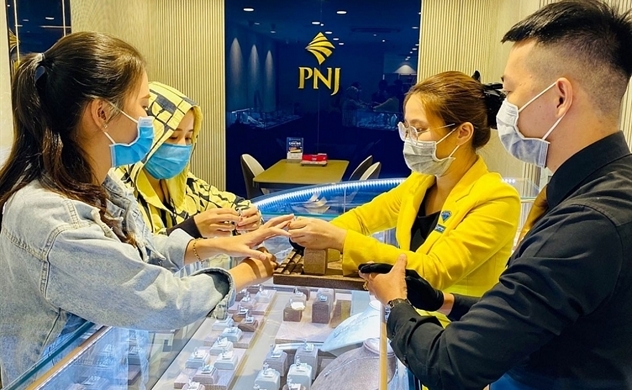 Vietnamese Jewelry maker has recorded VND736 billion ($32 million) after-tax profit, up 67.4% from a year earlier, according to the company’s statement.

In the first six months of 2021, PNJ achieved VND11.637 billion ($506.8 million) in net revenue, an increase of over 50% over the same period last year. The VND736 million after-tax profit has helped the firm to complete almost 60% of the whole-year profit goal.

In June alone, PNJ’s net revenue reached VND1,011 billion ($44 million), down 17.5% over the same period last year while after-tax profit was VND51 billion ($2.2 million) , down 36.3% due to the recent pandemic outbreak and social distancing regime.

As of end of the second quarter, PNJ had 337 stores nationwide, including 311 PNJ Gold stores, 19 PNJ Silver stores. In addition, the business has 69 PNJ Watch stores under the shop-in-shop model.

In order to get the achievement, PNJ, which complied with social distancing according to the State's guidance on COVID-19 prevention, deployed plans to maximize business operations and optimize operations.

As a result, the ratio of operating expenses to revenue has improved significantly. Besides, PNJ has also developed the Style by PNJ brand, distributing Pandora products under the shop – in – shop model.

This brand started the multi – brand distribution strategy at PNJ to exploit the new customer segment as well as take advantage of customers who prefer international brand products, meanwhile stimulate the experience of customers and consumption of products in the PNJ brand ecosystem.

PNJ also deployed plans to maximize business operations and optimize operations such as "4H delivery service" which is free and speedy for all orders nationwide. PNJ's packaging and preservation process comply with standards, ensuring safety for customers.

As a result, online sales in June jumped 317% from a year ago. PNJ is also one of the pioneers in COVID-19 prevention since the pandemic was reported in Vietnam.

With the desire to contribute to the battle against the pandemic of Ho Chi Minh City and help the poor people and unemployed people, it initiated "Vong Tay Viet” campaign, in which the "0 dong" mini supermarket.

There have been 17 "0 dong" mini super markets in Ho Chi Minh City and 3 “0 dong” mini supper market in Binh Duong, Can Tho, and Da Nang.