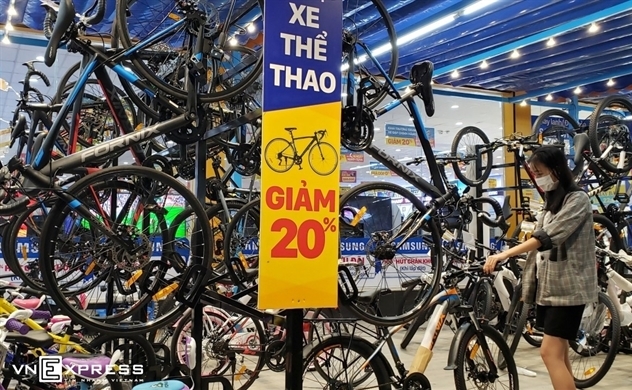 A customer tries out a bicycle at a Dien May Xanh store in Thu Duc City, HCMC. Photo by VnExpress/Phuong Dong.

Electronics retail chain Mobile World has begun to sell bicycles at two of its Dien May Xanh outlets in Thu Duc City, HCMC.

It displays around 100 models at the stores.

Mobile World CEO Doan Van Hieu Em said the two outlets are selling an average of 15 bicycles a day along with accessories like helmets, water bottles and bike locks.

He said around 2.4-2.5 million bikes are sold each year in Vietnam, and the market has potential since people have begun to pay more attention to their health and there is high demand for workout equipment.

It plans to expand to local brand Thong Nhat and two more Taiwanese brands, Martin 107 and ASAMA, if sales are good, sell electric bicycles costing VND10-20 million, and expand bicycle sales to 10 other stores in various districts in HCMC and its neighboring provinces of Dong Nai, Binh Duong and Ba Ria-Vung Tau.

Mobile World had 4,354 stores at the end of April after opening nearly three a day on average last year.

It eyes top spot in all of Southeast Asia by 2030.