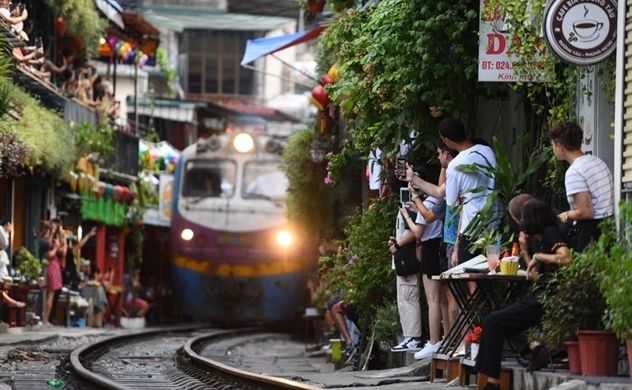 A train passes through a residential area in Hanoi in August 2022.Photographer: Nhac Nguyen/AFP/Getty Images

Authorities in Vietnam’s capital have ordered the temporary closure of one of the city’s most popular attractions, a 300-meter stretch of railway narrowly bordered by cafes, restaurants and shops.

Officials in Hanoi’s downtown Hoan Kiem district announced the move late Wednesday, blaming safety violations raised by the national railway, and said all shops in the area have to close in the next three days. It wasn’t immediately clear how long the shutdown would last.

The controversy is the latest twist in the uncertain life of a landmark that has faced repeated threats due to clashes between small businesses and the local government. It’s also a sign of the Southeast Asian nation’s cautious embrace of foreign visitors as regional neighbors rush to rebuild tourism industries decimated by the Covid-19 pandemic.

The Hanoi Train Street, as it’s popularly known, first attracted the ire of the municipal government in 2019.  Tourists who typically throng the street taking selfies or seeking to catch a glimpse of a train passing just in front of them were blocked by barricades erected by the authorities and a deadline was set for the closure of cafes surrounding the track due to safety concerns.

Authorities ultimately eased their crackdown after a backlash from local businesses which said that tourism revenue would be hit hard by the decision.

The pandemic then led to the area turning quiet for about two years, amid lockdowns and virus restrictions. But in defiance of authorities, businesses began gradually reopening in March after the country relaxed its border curbs.

Officials have not issued any statements encouraging the return of shops, said Le Tuan Anh, the 50-year-old owner of Railway Cafe, which has operated in the area for seven years. Businesses have taken the lead by setting up electricity and water lines and cleaning the rail track regularly, as well as warning visitors to stay inside as trains approach, he added.

"The authorities have always wanted to shut down the street, they don't want to find better solutions,"  Anh said in an interview with Bloomberg before the latest clampdown. “Since my family started living here in 1965, there have never been any regretful accidents with tourists or locals.”

The railway was built by the French when they ruled the country near the start of the 20th century and is now run by Vietnam Railways, a state-owned operator. Residential buildings were built around the track in the 1950s and 1960s to house the families of railway employees, although businesses only began to spring up in the last decade.

District authorities are working on their own plan to develop the area as a tourist attraction to meet locals’ and visitors’ needs and comply with safety regulations, including setting hours for trains to pass, local news website Dan Tri reported.

While Vietnam has seen a tourism rebound and set a target of luring 5 million foreign visitors this year, it attracted just 1.4 million as of the end of  August, according to government data. Its regional rival, Thailand, has attracted about 3.8 million as of mid-August and has raised its forecast for overseas arrivals this year to 10 million.

Huong Ly, a third-generation resident of the street, who started a restaurant and coffee shop two years before the pandemic, said the government should support locals more to help develop tourism. “Thailand, China, India and Taiwan all have railways and they are doing well with supporting businesses springing up around there,” Ly said. “If they can do it then we can also do it.”